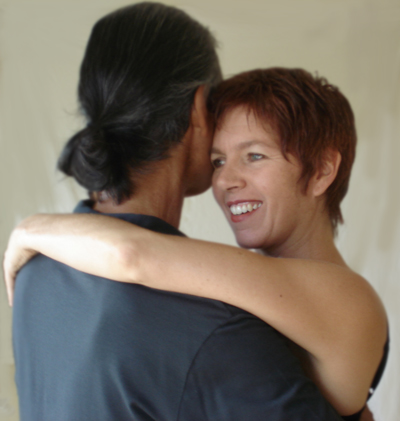 Liz Haight began dancing at the age of five, studying ballet, modern, tap, and jazz throughout her childhood in New York City. She performed with the Jose Limon Dance Co. at Lincoln Center and later through the Julliard School of Dance. As an adolescent, she was a scholarship student at the Alvin Ailey American Dance Center, where she trained with Judith Jamison.

Since 1991, Liz has focused on authentic club-style social dances originating in Latin America. She has been dancing Argentine tango since 1998. While she has studied all forms of tango, her love lies in close-embrace Milonguero-style tango - the tango of the Golden Age and the tango of the crowded dance floors of Buenos Aires. In this style, she has studied extensively with Ricardo Vidort, Alicia Pons, and Osvaldo & Coca Cartery (2004 world champions).

Liz has had her own business teaching Latin social dances in Santa Fe, New Mexico since 1997. She has been teaching tango since 2002 and now works full-time teaching exclusively Milonguero-style Argentine tango both privately and in group classes. In addition, she teaches tango nationally in weekend workshops. Bob Bern, her student of 15 years, is now assisting her in group classes at Two Moon Tango and some out of town workshops. Between 2005 and 2010, she taught regularly at the Denver Tango Festivals, both with her partner Masami Hirokawa and with Ricardo Vidort, her teacher and renowned Milonguero of the Golden Age. In 2011 and 2012 Liz and Masami taught at the Chicago Tango Festival and in 2012 at the Albuquerque Tango Festival.

Liz has been hosting milongas (dance events) in Santa Fe since 2002, including the Carlos Gospel Cafe, the Hotel St. Francis, the Cloud Cliff Cafe and Artspace, Joe’s Diner and now at Liz and Masami’s own studio, Two Moon Tango.

Liz's love of people, her technical ability in both leading and following, and her passion for the energetic and emotional elements of the dance have led her to develop effective ways of teaching not only the physical and functional aspects of the dance, but also its more elusive, transcendent qualities. Her exploratory form of teaching allows for a visceral experience of tango as a form of communication, creativity, connection, and the joy of self-expression.

Liz holds an interdisciplinary Bachelor's degree in art and psychology from Bennington College and a Master's degree in clinical psychology with a specialty in body/mind integrative therapy from Antioch University. She gave up her career in body-psychotherapy in 1998 in order to devote herself to teaching dance full-time. 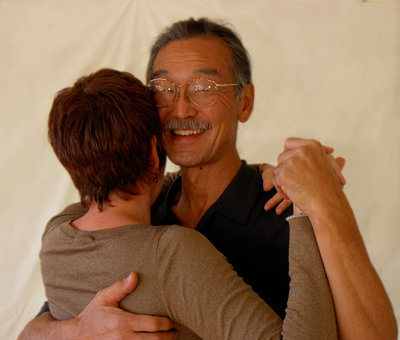 Masami Hirokawa comes to tango with a deep understanding of the creative process and a natural, delightful ability to interpret music. In his words, "Argentine tango is like working on a piece of art except, in the case of tango, we are each other's canvas".

Masami has been an artist his whole life. In his youth he studied ballet and tap dance as well as music and sports. In his twenties he was a nationally-ranked motorcycle racer, and in his thirties he competed nationally in various ballroom dances. He has been a successful free-lance illustrator since 1971. He is now retired as an illustrator and in addition to tango is involved in his own artwork.

Masami has danced Milonguero-style Argentine tango since 2001 and partnered with Liz between 2003 - 2016. He has also studied extensively with Alicia Pons, Ricardo Vidort, and Osvaldo & Coca Cartery, 2004 world champions.

Masami assisted Liz teaching Argentine tango between 2005 - 2015 in Santa Fe, in workshops out of state, and at a number of the national tango festivals since 2006. In his work with Liz, he is an integral part of developing both subject matter and experiential methods of teaching. Currently, he teaches only private work at Two Moon Tango.

Bob Bern has been a student of Liz's since 2003 and has been assisting her since 2015 in her group classes at Two Moon Tango and at some out of state workshops. He has also studied extensively with Ricardo Vidort and Alicia Pons. Bob is a visual artist. His text based drawings are an exploration of people's complex and personal stories with healthcare and illness. He is a gifted dancer, a natural teacher, and has a deep commitment to the creative process and it's role in Milonguero Style tango.